The Definitive Guide To Becoming An eBay Power Seller 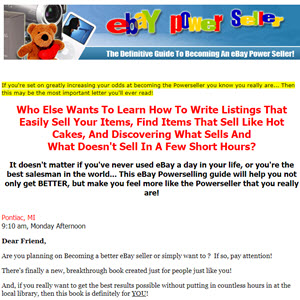 Recapturing the Spirit of the Chicago Entrepreneur

Chicago, which is my home town, has a rich history as a center for manufacturing and commerce. Those of us who love to buy and sell treasures of all sorts benefit from that history. We fondly remember a place called the Maxwell Street Market, a huge open-air flea market where you could find virtually anything for sale, and which lives on in a smaller (not to mention cleaner) form every Sunday morning.

As a child, Bob Kopczynski used to visit Maxwell Street with his father. Today, he and his wife Katy keep a little bit of Chicago history alive with his eBay business, which goes by the User ID of maxwellstreetmarket. Bob, who works full-time as a construction manager and runs his eBay business in his off-hours, first became interested in eBay when he was looking for computer equipment and souvenirs related to the rock group Van Halen. Then, on a whim, he decided to sell a pair of tickets he had to the original Woodstock music festival held in 1969. "I said to myself, I'll put 'em for sale up there on eBay, and we'll just see what happens." Bob was immediately clued in to the promise of selling eBay when the tickets, which normally would have sold for $30 or $40, fetched a whopping $150 online. He convinced his wife Katy to start selling on eBay, put up $250 to get started, and the rest is history.

"When Don (Don Colclough, who is profiled in Chapter 5) and I started out, we were ridiculed," laughs Bob. "People thought we were crazy." Today, maxwellstreetmarket is very much an eBay business. Katy left her job as a schoolteacher three years ago. Now she works full-time at the business, handling bookkeeping and answering questions from buyers. Bob handles purchasing by scouring estate sales and flea markets and does photography. A neighbor, Nancy Armstrong, makes sure the sales go online. At least five Kopczynski family members help with crating, packing, cleaning, and the many other duties that are required to sell anywhere from 20 to 50 items per day on eBay.

The business has expanded along with the Kopczynskis' suburban Chicago home. First, Bob and Katy worked out of their basement. They made enough on eBay to build a pool and a deck. Then they had to build a garage just so they could store their eBay inventory (Bob calls it "the garage that eBay built"). Now, they rent warehouse space in several locations.

The Kopczynskis put a premium on credibility and customer service. They have built a steady income by putting customers first. "I have a goal to make people feel comfortable," Bob explains. "Eighty percent of people are still not comfortable with buying online, even though they love auctions. The big hurdle is, why would I send someone I don't know money? I set a goal to become a licensed state auctioneer; I have to take classes and pay $500 every year to keep my license. I sometimes do auction off high-end items like cars or boats on site, but 99 percent of my auction business is on eBay. I mention that I am a licensed auctioneer in my eBay listings, and I think that tells people they can rely on me. It's well worth the expense because it tells people I am well established."

The family's eBay operation is a business in many other ways. For one thing, it's part of KMK Management Co., Inc., Auctioneers and Estate Liquidators, a company of which Bob is President and CEO. Bob says one reason he decided to incorporate was liability; the corporation has limited liability if a customer decides to sue for some reason. "I pay a CPA to do our taxes, we do collect sales tax charged to Illinois residents. Besides that, we pay our employees' payroll taxes, too."

The businesslike emphasis pays off in customer relations. Bob and Katy don't run into too many deadbeat bidders. They estimate that only two to three percent of their customers fail to follow through with sales. More than 99 percent of the feedback they receive is positive. When they do run into problems with customers, they don't make a big deal about it. "We're not going to chase you if you don't pay us. We'll send you a couple of reminders, and then we tell eBay to pursue you. Then, we just wait 10 or 14 days and relist it."

The matter-of-fact approach to the business applies to sales, too. Bob has a policy of selling everything on a no-reserve basis—even highly desirable items

for which he may have paid $100 or more. "I'll put up a Tiffany lamp at a starting bid of $1.99 with no reserve. Almost all of our auctions are conducted that way. The no-reserve policy quickly eliminates competition that sets an opening bid. My items tend to sell higher than ones with a reserve. Personally, when I'm shopping on eBay, I pass up any auction that has a reserve. You don't always get your cost back. You don't always make money on everything you sell. But it's a matter of volume and turnover—that's what counts. If you pay $200 for something and if it sits on a shelf for six or eight months, it's no good. Volume is the magic—better to get the money quickly and build up lots of sales."

Bob doesn't specialize in one particular type of item, although he personally collects vintage toys, radios, and musical instruments. He says he is "continually surprised by how much some things will bring. We even sell empty toy boxes— people who know what they are and who collect toys will pay for them."

Bob estimates, in fact, that a high percentage of his own customers are antique and collectible dealers who buy on eBay and resell items in their own brick-and-mortar stores. "I would like to have 90 percent collectors and dealers as my customers because they will pay a higher price, and they're not likely to turn out to be deadbeats."

In order to turn around 600 to 700 items a month, Bob uses an auction management service called Auction Helper (http://www.auctionhelper.com). "The auction management service does the shipping. They send an e-mail to the high bidder that says, "Click here to get your invoice and your seller's address." The buyer has a printable invoice with all of the details printed right on it."

Bob's number one tip to would-be eBay businesspeople? "Don't get hung up on making a ton of money on every single item," he says. "You have to let it go. Not everybody makes money on every investment. If you had brick and mortar store stuff, you'd run into losses too—something might get damaged, or your employees might take stuff. It's the same on eBay. You just have to let it go and move on to other sales."

Was this article helpful?

If they don't reveal their eBay id don't trust them. Discover how a real life eBay PowerSeller who actually trades on eBay legally drives 1000s of visitors to his websites using online auctions and the viral power of eBay.

Get My Free Ebook

Become an eBay PowerSeller in 90 Days